Football and I - How football has affecte my life 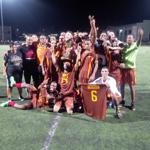 Football makes everyone on Dandy Town Hornets a Champion

How has football impacted your life?

Tell us your personal story about how football has impacted your life. Send us an amateur video clip - we will select some of your great stories and post them for Bermuda and the world to view.

Whether you are a player/coach/administrator/referee/fan, current or former, young or old, club or national, male or female - it doesn't matter - share your story with us.

Football and I - How football has affected my life.

Cassandra Trott - Referee - Has a passion for learning and loves

I have always been a very avid sportsperson.  I  have played football at the senior level.  I am also a former National Softball Team Player.  I took up refereeing so that I could remain actively involved in the sport which I truly love and as an avenue to give back to the sport.

Refereeing is always going to be a very challenging and objective job.  Any decision made is going to be viewed as incorrect by someone – whilst not the expectation, this is becoming the norm, especially here in Bermuda.

My love for sports is immeasurable.  It has always been very challenging as a referee in male dominated sport, however, I have remained focused on achieving all I can from this great game of football.  I continue my passion for learning by watching as many televised games as possible, especially the English Premier League, where finally they have appointed their first female referee.

I became a referee as a part of a bet which I lost to Police Sgt Greg Grimes, a colleague of mine who had been refereeing for years prior.  I had played football before and I wanted to continue to be involved in the sport through refereeing. I am still here after losing that bet all those years ago!

I first played football in 1967. I was about 6 years old. I became involved with Somerset Cricket Club from age 9.

I was first interested in refereeing because I was coaching a ladies' team and thought it would be good to know the rules so as to understand why referees made the calls they did. I recall my first official game was a match between Paget and Island Rangers.

I am a referee because I believe it’s important to give back to the sport that allowed me to further my education but refereeing also allows me to provide feedback to younger players who may need a bit of guidance as they develop their craft.

Each game day I prepare for refereeing by knowing who the teams are; sorting out my gear the night before, ensuring that I know the competition rules if the match is a cup match or other, and most importantly I try to go to bed early. My physical fitness program involves running, weights, and planking.

At the end of  a match I reflect on the calls that I have made and if there’s a question in my mind I refer to the laws of the game and or training videos to confirm my decision.

I encourage other people to referee because it can be rewarding. You can become a full international referee and travel to faraway lands or you can be a local referee and be the catalyst for changing a players life or lifestyle through positive feedback whether the impetus of the feedback is as a result of a foul or simple question as to why a call is made (it should be noted that a referee is under no obligation to tell a player why he was penalized). For me I find some players appreciate the feedback because they just don’t know whilst others like to test you because they know a little bit of the law but may lack the application.

I encourage young people to be a referee because they can make a future out of it. The better you become the more opportunities you have such as refereeing in a World Cup or other international stage. If they do, the pay can be very rewarding, so I have been told.

I love refereeing because I enjoy a good competitive game. I firmly believe that all former players should strive to give back to the sport either through coaching or refereeing because without officials the likelihood of having a fair game is very slim.

I have been on a FIFA referee course in Bermuda

In refereeing I want to be all of the following though it would appear that my age is considered a limiting factor for at least one- Top Referee in Bermuda, FIFA Referee (but age restricted), Referee Fitness Instructor, Referee Instructor and Beach Soccer Referee.

I encourage the public to respect referees because the public’s behavior towards officials can influence how a youngster reacts when he or she becomes of age and are playing in a competitive match. Also, referees are no different than anyone else meaning they’re human and will at times make choices that may not always be correct, however, every referee is neutral and applies the laws of the game as they see fit. They don’t have minutes to decide whether to blow the whistle or not they only have a split second. There’s no instant replay or timeout out; the decision to blow the whistle or not is only tempered by a choice to play an advantage or not. Without rules or laws there tends to be anarchy or chaos.

I have been blessed to have played football at all levels both in Bermuda and overseas. I have seen the laws of the game evolve as well as the equipment used but through all that has changed, there remains one constant and that is the referee. The referee is in charge and his decision(s) during the game are final. So let’s respect him or her because their only interest is to enforce the laws of the game, he or she does not care who wins or loses.

Football and I - Dominique Richardson